Picture this scene*. It’s the Day of the Dead. On the outside, across the city of Tijuana, Baja California, the sounds of the fiesta, of music and laughter can be heard. People are enjoying the finest of food and the best of company, and they are remembering all those who have come before them whom they love yet see no more. On the inside, of La Mesa state penitentiary, there are others who are not seen, yet loved, lost in a dark place, yet not altogether bereft of the light. Sixteen men are barricaded in on the third floor. The power has been cut-off, and the only light is cast by the flames rising from the cell windows. They are up there, in that state, because something in them had snapped. Deprived of water and food, brutalized day after day, these men had decided to take matters into their own hands, and take over part of the prison.

Outside, a SWAT team has assembled, along with television cameras and the mothers and wives and girlfriends of the inmates are with them, crying out for their beloved not to be killed. The prison warden is not letting anyone in, nor anyone out, except one. She is dressed in a white habit, and stands there fair-skinned and rosy-cheeked, asking to speak to the person in charge. Nobody liked to say ‘no’ to Madre Antonia. She comes and goes freely into the prison because it is, in fact, her home. She had come to La Mesa in her fifties, leaving a life in Beverly Hills, to come and live in poverty alongside the forgotten men of Tijuana’s prison system and so became the closest thing any of them saw of love in their years of incarceration. She asks to be allowed in, to be with ‘mis hijos’, my sons. 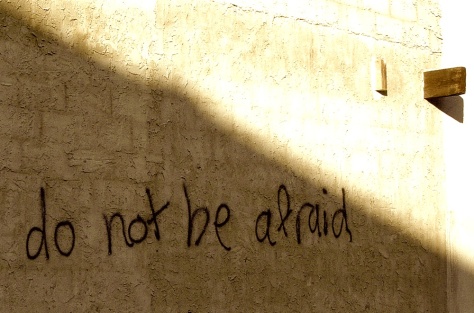 She enters and walks into the darkness, stopping to pray with some of the men in the chapel, and then feels her way up to the third floor and to the heart of the riot. In a soft yet clear voice, she says to the leader, ‘you have to stop now. I know you have been suffering so much, but there is another way’. They throw their weapons out of the windows and go with Madre Antonia to sit with the warden and talk it all through; and so it was that night that an angel dressed in white spoke a word from God into the darkness of night: ‘do not be afraid’.

Fear can be a powerful force in our lives. I am afraid of ‘large’ spiders, which in my case is anything bigger than my thumb. Perhaps it is God’s sense of irony that whenever there is a spider in our house I am the one who is called to assist in its capture and release into the wilds of Pacific Beach. I am sure that for most people, catching a spider takes all of a few seconds of effort, whereas for me, a large part of the evening will be dedicated to devising a failsafe scheme that ensures that said spider does not come within three feet of my skin. I sometimes wonder if my children plant spiders in their bedrooms just for the entertainment value of watching me trying to extract them. And of course, my wife knows exactly how to rile me when I am planning my own version of the D-Day landing for an arachnophobic. “Shall I just do it myself?” she asks casually. “Of course not”, I almost always protest, as if she has just suggested that I am no longer capable of tying my own shoelaces. “I’m just thinking”.

Many of our fears are visible and reasonable: like the fear of falling off tall buildings, or the fear of wild animals, or of large waves, or of the credit card bill after a particularly heavy month of shopping. Yet it is not the fear which is clear and obvious that we should be most concerned about, because much like my spider kept at more than arm’s length, if we can see it, we can avoid it. The fear we should be mindful of is the sort that does its work on us more quietly and unnoticed. It is such unseen fears that we have to be prepared to deal with.

About fifteen years ago I got a good lesson in dealing with fear from Wayne, a man in prison whom I visited every month or so at the Massachusetts Correctional Institution, in Norfolk. It is fair to say that there were times when I felt more than a little out of my depth. How do you find a common language for two such different experiences of life? There he was, brought up the hard way on the rough side of town, surrounded by drugs and gang life; and there I was, from a quiet English shire town, studying at a privileged university and whose only real cares in life were papers, grades, and where to take my to-be wife on our next date. Yet there we sat, the English cleric and the Boston gang member.

I never heard Wayne’s confession; never knew why he was serving time. What I did learn from Wayne though, was how potent a force fear can be if you let it into your heart – not the fear of others, but the fear that tells you that this is all that your life will ever amount to. For Wayne, there were two freedoms he had chosen to walk toward. One was the freedom that lay at the end of his prison sentence. The other was to be set free on the inside, which for him arrived in the form of poetry. Wayne wrote poetry of a poignancy and potency I had never heard; words etched on a page written from a heart that knew that if it was ever to be free, it would have to dream that hope could be found beyond the horizon of his present fears and failings.

This holy week’s remembrance of the passion of Jesus Christ is an opening for us to name our own fears. It is a time for us to approach God with honesty, laying down those gods which we have clutched too close out of fear that the God who is beyond our grasping might not actually be available. This is a week for honesty and hope. You and I will never be able to receive the gift of life and the abundance that God calls us to unless we will be willing to name our truth. We fail and we have fears. Some are clear and plain to us, and for other fears and failings we need a community to help us see ourselves for who we truly are. May this journey to the cross be a way, for each who wish to travel it, of honesty and hope. ‘Be not afraid’, the angels said to the women who would find Jesus no longer entombed by death. Be not afraid, for you do not walk this way alone.

* The scene as described owes much to the wonderful book by Mary Jordan and Kevin Sullivan The Prison Angel: Mother Antonia’s Life of Service in a Mexican Jail