A story from the Desert Fathers:

The elder rose up in reply and stretched out his hands to heaven, and his fingers became like ten lamps of fire. He said: ‘Why not become fire?’

What if our vocation were to become fire, casting light on dark places? What if our calling in this world were to be as people through whom the brightness of heaven could be seen? What if we saw light and beauty as God sees it?

Perhaps these are not the normal questions you ask yourself when you brush your teeth in the morning, and it is unlikely that your fingers have turned to flame recently, but the truth about our sojourn on earth is that you and I walk in the presence of living miracles, six billion holy flames criss-crossing the planet every day. Some are risking their very lives as I write this, desperate to stay afloat across the Mediterranean in the hope of a future beyond the bombed out streets of Syria. Others are gambling working women and men’s futures on one rogue Wall Street trade. There are those who will save a life tonight and there are those who will take one.

Human dignity is the foundational premise of civilization. It is also fundamentally a theological truth. We are infinitely beautiful, fashioned in the image of a love-giving maker. As a Christian, I have to commit to the embodied difference of the other, to the irreducible right of that other to be valued and honored and seen as God’s own. The calling of Christians, indeed the calling of everyone, is to see each human life as God sees it: as infinitely valuable.

It is because of this Christian conviction of the inviolable value of others that I believe churches should find their voice in this most critical time in our national life. Churches should be free from electioneering because people should respected to think freely about their vote. Yet churches should also be free to take their place in the public square. The rhetoric of the last many weeks of campaigning has uncovered the fissures that pervade our life as a nation, fissures that are characterized and deepened by an increasing permission people feel to be able to speak of one another in ways that do no justice to their humanity. We have heard  entire ethnic groups and nationalities caricatured, people with disabilities mocked , women belittled and degraded, people’s body image maligned. Our vocation is to honor one another, and the churches’ vocation is to remind society of that calling, a calling that transcends political and religious affiliations. It is not possible for our political life to engage in such a mutually diminishing season of campaigning and still remain as it was before we began. Ugly and hurtful rhetoric impacts us all. We have all been lessened by these months of public conversation. 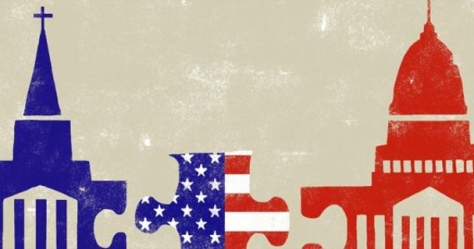 And so I appeal to the churches, to Christians, to any person of faith, ‘Why not become fire?’ Why not realize our vocation to cast light on dark places? Let us stand up as people of faith and call out with passion and power the denigration of human dignity when we see it around us. The desert fathers and mothers went to the wilderness in order to draw themselves and those who encountered them closer to the holiness of God. Perhaps we, as their legacy in Christian community, might do well to ponder where our wilderness places should be after this election, as we seek to heal and once more see our fellow human beings as a source of wonder and joy. Mahatma Gandhi once said when asked what he thought of western democracy that it was a ‘great idea’. It was a potent statement of subversion and hope. America is still a great idea; an idea worth fighting for.

One thought on “God and Politics”